The Best Kind of Patient: In Which My Body Decides to Mix Things Up (1 of 2)

When first diagnosed with MS, I comforted myself with thoughts like “At least it isn’t cancer!” So I tucked my hypochondria away into a memory box, certain I wouldn’t need it now that I’d been assigned my disease. Then the MS Society’s mediocrely written but informative magazine, Momentum, showed up on my doorstep with headlines like “MS and . . . Managing Two Chronic Illnesses.” Say what?! What kind of a bullshit world do we live in? One that can dole out multiple heavy physical burdens at once, it seems. I’m pleased to report that presently I’m holding steady with a single illness, but I have just wrapped up ten weeks of queries, biopsies, and procedures confirming that.

I saw my GP at end of March. She noticed, as she* did six years ago, a lump on my thyroid. This prompted an ultrasound, which showed the lump had grown one centimeter. Thus it was time for a needle biopsy (AKA fine needle aspiration or FNA). What fun! I had done this dance back in 2011, so I was reasonably calm about it — both in terms of the likelihood that everything was benign and the anticipated discomfort. As I emailed to my family after the first go round, “The local anesthesia burned like crazy, but it meant the extractions were painless.”

Imagine my delight when the pathologist entered the 10’x10′ biopsy room and said, “We don’t bother with anesthesia anymore. It often creates a lump that makes the biopsy more difficult.” Cool cool cool. I can do this. The doctor, a fellow, and a guy doing a swap from NIH** crowded around the exam table. NIH held a tiny cold pack to my neck, the fellow looked on, and the doctor prepared the needle, talking about how thin my neck is. Thin neck = tiny needles. Win. The lack of anesthesia meant each needle hurt, but each stick was fairly quick and burn-free. After the third aspiration, the anticipated question came, “Would you mind if the fellow did the next one?” I said, “That’s fine! I know whenever I’m at a teaching hospital getting poked by amateurs part of the deal. Plus, I think it’s important.” Did I sound like a kiss-ass? Sure! But I meant it. “Oh, I was going to wait until the end of this to tell you, but I’m going to say it now — you are the best patient! You’re so easy-going.”

It took five sticks in all. Unsurprisingly the fellow’s was the clumsiest of the lot, but he made a noble effort. After each sample, the pathologist put some cells on a slide, stained them, and took a look to make sure she was getting what she needed. Before I left, my AP bio instincts kicked in, and, emboldened by my status as “the best patient,” I asked to look in the microscope. The pathologist gave me a brief tour of the cells on the slide, pointing out signs that my growth (which, fun fact, is technically a freaking goiter) was merely inflammation and nothing malignant.

A week later my GP called to confirm just that, so I guess I’m off the hook thyroid-wise . . . for another six years.

*My GYN was the first to notice the lump. When I told a friend, she laughed and said, “Through your pap smear?!” I have the best squad.

** All of my caregivers were different nationalities, which seemed ripe for a joke (“an Indian, a Pakistani, and a Russian walk into an exam room”), but, alas I couldn’t muster it. Also, that’s racist. 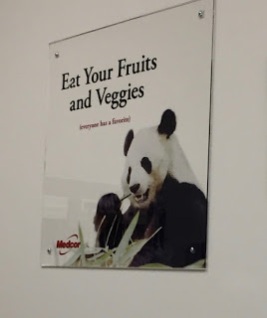 “Everyone has a favorite!” says this panda, my biopsy companion.
I realize this an odd accompanying photo, but the other option was a goiter. No one wants to see that.

Leadership coach, word enthusiast, and lover of all things food-related. MS-haver since 2004. View all posts by rebeccascott

2 thoughts on “The Best Kind of Patient: In Which My Body Decides to Mix Things Up (1 of 2)”